REMs are associated with a lower level, more lateral origin, stenosis and more posterior location with respect to the bronchus at the pulmonary hilum. The unique CTA data obtained in this study showing the anatomy of REMs will be highly useful for surgeons in identifying REMs.

• Unifocalization is a very important surgical approach for PA-VSD-MAPCA patients.
• The anatomical variability of REMs becomes clinically relevant in unifocalization.
• CTA provides a non-invasive way to observe the anatomy of REMs.
• REMs are associated with lower level, more lateral origin, more midsegment stenosis.
• REMs tend to be posterior to the bronchus at the pulmonary hilum. 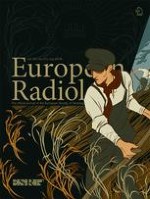 Dose reduction in abdominal CT: The road to submillisievert imaging

Could IVIM and ADC help in predicting the KRAS status in patients with rectal cancer?

Structured vs narrative reporting of pelvic MRI for fibroids: clarity and impact on treatment planning