The online version of this article (doi:10.​1007/​s10456-016-9525-6) contains supplementary material, which is available to authorized users.
Gary J. Smith and Alejandro S. Godoy have contributed equally to this work.

Sex-related differences in the role of androgen have been reported in cardiovascular diseases and angiogenesis. Moreover, androgen receptor (AR) has been causally involved in the homeostasis of human prostate endothelial cells. However, levels of expression, functionality and biological role of AR in male- and female-derived human endothelial cells (ECs) remain poorly characterized. The objectives of this work were (1) to characterize the functional expression of AR in male- and female-derived human umbilical vein endothelial cell (HUVEC), and (2) to specifically analyze the biological effects of DHT, and the role of AR on these effects, in male-derived HUVECs (mHUVECs).

Immunohistochemical analyses of tissue microarrays from benign human tissues confirmed expression of AR in ECs from several androgen-regulated and non-androgen-regulated human organs. Functional expression of AR was validated in vitro in male- and female-derived HUVECs using quantitative RT-PCR, immunoblotting and AR-mediated transcriptional activity assays. Our results indicated that functional expression of AR in male- and female-derived HUVECs was heterogeneous, but not sex dependent. In parallel, we analyzed in depth the biological effects of DHT, and the role of AR on these effects, on proliferation, survival and tube formation capacity in mHUVECs. Our results indicated that DHT did not affect mHUVEC survival; however, DHT stimulated mHUVEC proliferation and suppressed mHUVEC tube formation capacity. While the effect of DHT on proliferation was mediated through AR, the effect of DHT on tube formation did not depend on the presence of a functional AR, but rather depended on the ability of mHUVECs to further metabolize DHT.

(1) Heterogeneous expression of AR in male- and female-derived HUVEC could define the presence of functionally different subpopulations of ECs that may be affected differentially by androgens, which could explain, at least in part, the pleiotropic effects of androgen on vascular biology, and (2) DHT, and metabolites of DHT, generally thought to represent progressively more hydrophilic products along the path to elimination, may have differential roles in modulating the biology of human ECs through AR-dependent and AR-independent mechanisms, respectively. 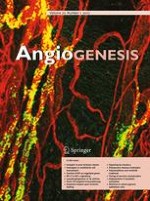 The role of endoglin in post-ischemic revascularization

Differential regulation of angiogenic cellular processes and claudin-5 by histamine and VEGF via PI3K-signaling, transcription factor SNAI2 and interleukin-8