Natural killer cells (NK) are often believed to play a positive role in the antitumor immune response. However, this is not the case for patients with advanced pancreatic cancer. This study was performed to determine the unique subtype of “educated” NK cells and their prognostic value in patients with advanced pancreatic cancer.

Survival analysis showed that a high density of NK cells accompanied by a high neutrophil-to-lymphocyte ratio was associated with reduced overall survival in both the derivation and validation cohorts. Multivariable analysis also showed that high NK infiltration (HR 1.45, 95% CI 1.17 to 1.79, p = 0.001) was an independent prognostic factor. In these patients, high NK infiltration was associated with reduced levels of IL-2, IFN-γ and TNF-α, although only IFN-γ reached statistical significance, which accounted for this unique phenomenon.

Natural killer cells in patients with advanced pancreatic cancer are a unique subtype with anergic features. A high density of NKs predicts poor survival in these patients, possibly because an active inflammatory response and reduced secretion of IL-2, IFN-γ and TNF-α inhibit NK activation. 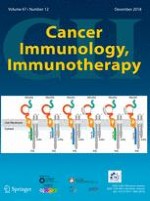 Cystatin F as a regulator of immune cell cytotoxicity

Targeting CTCFL/BORIS for the immunotherapy of cancer