The study group consisted of 283 patients who underwent PD from July 2002 to June 2007. Angiography and arterial embolization were performed for every sentinel bleed and detected pseudoaneurysm. Patients (n = 311) from a previous study (July 1996–June 2002) were used as a historical control group.

Sentinel bleed was detected in 20 patients in study group. Of these, angiography-detected pseudoaneurysm was evident in seven (35%); all were successfully embolized. Delayed massive hemorrhage occurred in three of 13 patients with sentinel bleed but negative angiography. All three were operated on; one died of uncontrolled bleeding. The number of hemodynamically unstable patients before transfusion, units of transfused packed cells, and bleeding related mortalities were significantly less in study group than the control group.

Institution of angiography for every detected sentinel bleed after PD enabled us to embolize seven pseudoaneurysms before massive hemorrhage. Most importantly, bleeding-related mortality was significantly less than in the absence of angiography. 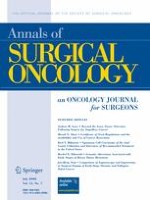 Tumor Diameter as a Prognostic Factor in Patients with Gastric Cancer

Urban/Rural Residence Moderates Effect of Race on Receipt of Surgery in Patients with Nonmetastatic Breast Cancer: A Report from the South Carolina Central Cancer Registry

Survival After Resection of Ampullary Carcinoma: A National Population-Based Study