Our aim was to estimate the prevalence-based cost of illness imposed by nocturia (≥2 nocturnal voids per night) in Germany, Sweden, and the UK in an average year.

Information obtained from a systematic review of published literature and clinicians was used to construct an algorithm depicting the management of nocturia in these three countries. This enabled an estimation of (1) annual levels of healthcare resource use, (2) annual cost of healthcare resource use, and (3) annual societal cost arising from presenteeism and absenteeism attributable to nocturia in each country.

Nocturia appears to impose a substantial socioeconomic burden in all three countries. Clinical and economic benefits could accrue from an increased awareness of the impact that nocturia imposes on patients, health services, and society as a whole. 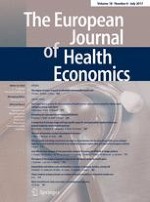 How important is severity for the evaluation of health services: new evidence using the relative social willingness to pay instrument

The enigma of value: in search of affordable and accessible health care