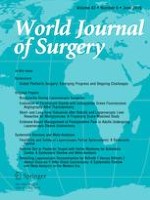 Re: Evaluation of Parathyroid Glands with Indocyanine Green Fluorescence Angiography After Thyroidectomy

Global Initiative for Children’s Surgery: A Model of Global Collaboration to Advance the Surgical Care of Children

Revisiting Laparoscopic Reconstruction for Billroth 1 Versus Billroth 2 Versus Roux-en-Y After Distal Gastrectomy: A Systematic Review and Meta-Analysis in the Modern Era