Specific morphological changes may be absent in some cases of electrocution shocked by the voltage of 220 V or lower. In this study, we attempted to demonstrate that the anterior wrist and medial malleolus were the optimal sites with promising and significant changes in electric death through the hand-to-foot circuit pathway. We established an electric shock rat model and observed histopathologic changes in the anterior wrist and medial malleolus. The results showed that the current intensities in the left anterior wrist and right medial malleolus were remarkably higher than those in the other sites, and the nuclei long/short (L/S) axis ratios of the arterial endotheliocyte and the skeletal muscle cell in these two areas were significantly higher than those in other parts of the body. These findings suggested that the anterior wrist and/or medial malleolus soft tissues as the narrowest parts of the limbs could be used as promising and useful sites for the assessment of electrical shock death, especially in forensic pathologic evaluation. 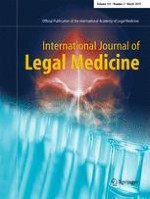 Magnetic resonance imaging of the distal radial epiphysis: a new criterion of maturity for determining whether the age of 18 has been completed?