Vascular antiphospholipid syndrome (VAPS) and obstetric (OAPS) are different entities because some patients only develop thrombosis (without recurrent pregnancy losses) and vice versa. Only two articles have reported that low 25-hydroxy-cholecalciferol (vitamin D3, VD3) levels were not correlated with the presence of conventional antiphospholipid antibodies (aPL Abs: anticardiolipin (aCL), anti-beta2glycoprotein I (aβ2gpI), and lupus anticoagulant (LA)), but no article analyzed the association of VD3 and anti-annexin A5 (aanxA5) Abs. The aim of our study was to investigate the association between VD3, multiple positivity of conventional aPL and aanxA5 Abs levels only in female OAPS vs. VAPS. Our study included 62 consecutive female PAPS patients. Concentrations of Abs were measured by ELISA, while VD3 levels were determined by immunochemiluminescence. Only 10/62 (16.13%) had sufficient (≥ 30 ng/ml) VD3 levels, while 48/62 (77.42%) and 4/62 (6.45%) had insufficiency and VD3 deficiency, respectively. Statistically significant VD3 deficiency was noticed in VAPS (vs. OAPS, P = 0.013). A negative correlation between VD3 levels and the age of patients was noticed (r = − 0.493, P = 0.032) only in VAPS subgroup. Multiple positivity of aPL and aanxA5 Abs was not associated with VD3 deficiency. Newly emerging aPL Abs, such as aanxA5 Abs, or their combinations with classical aPL Abs are not associated with VD3 deficiency in neither OAPS nor VAPS patients. Due to its immunomodulatory roles in B-Ly homeostasis, supplementation with VD3 should be considered in APS, at least in subgroup with severe form of the disease, i.e., VAPS. 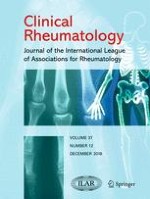 Development and effect of antibodies to anakinra during treatment of severe CAPS: sub-analysis of a long-term safety and efficacy study

Correction to: Efficacy of certolizumab pegol with and without concomitant use of disease-modifying anti-rheumatic drugs over 4 years in psoriatic arthritis patients: results from the RAPID-PsA randomized controlled trial

How should we manage low-dose methotrexate-induced pancytopenia in patients with rheumatoid arthritis?