Uncomplicated urinary tract infection (UTI) was defined as UTI in the otherwise healthy patient without relevant co-morbidities and complications. Patients were assumed to have UTI if diagnosis was made by the attending physician with conclusive dipstick results. For subgroup analysis, only patients with symptoms suggestive for UTI documented in their records were included.

228 patients with a UTI diagnosed by the attending physician with E. coli isolated in urine culture were included. 154/228 patients had documented symptomatic UTI, 57/154 had uncomplicated infection, 76/154 patients had cystitis, and 124/154 were female. Resistance rates of uncomplicated UTI in symptomatic patients were: ciprofloxacin 10.5%, cotrimoxazole 15.8%, amoxicillin/clavulanic acid 5.3%, nitrofurantoin 0% (CLSI MICs). Previous hospitalization in the last 3 months (including patients living in a long-term care facility) was significantly correlated with resistance to ciprofloxacin, cotrimoxazole and amoxicillin/clav. Previous hospitalization was a strong predictor of resistance to ciprofloxacin and cotrimoxazole in multivariate analysis also. Other risk factors correlated with resistance were hematological malignancy (for cotrimoxazole) and renal transplantation (for ciprofloxacin).

Cotrimoxazole is still an alternative for treating uncomplicated cystitis. Previous hospitalization in the last 3 months was a strong predictor of resistance to cotrimoxazole and ciprofloxacin. Other risk factors which might help guide empirical therapy are hematological malignancy and renal transplantation. 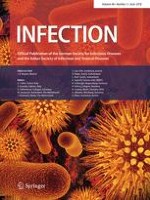 Evaluation and management of Staphylococcus aureus bacteriuria: an updated review

Infections in patients on BCR-ABL tyrosine kinase inhibitor therapy: cases and review of the literature