Empirical antibiotic treatment in urinary tract infection (UTI) in children must rely on surveillance data on the epidemiology and resistance patterns of common uropathogens. A retrospective analysis of bacteria isolated from children with UTI irrespective of underlying disease or pre-treatment was performed at the University Hospital of Freiburg, Germany, in 1997, and from 1999 to 2001. In the first study period, 261 positive urine samples and in the second period 684 positive samples were analyzed. Escherichia coli (57.2%) was the leading uropathogen followed by Enterococcus spp. (13.7%), Pseudomonas aeruginosa (7.0%), Proteus spp. (5.9%), Klebsiella spp. (4.7%), and Enterobacter/Citrobacter spp. (4.3%). Almost 50% of the E. coli isolates were resistant to ampicillin, but effectively no resistance against cephalosporins, aminogylcosides, ciprofloxacin, nitrofurantoin, and imipenem was observed. In Enterococcus spp. the resistance to ampicillin was about 15% and 40% to netilmicin, while none of the latter showed high-level aminoglycoside resistance. In P. aeruginosa, there was no resistance to aminoglycosides. No difference in resistance patterns between the two study periods was observed. We conclude that an empirical combination treatment of ampicillin and gentamicin, netilmicin, or tobramycin is appropriate in children with UTI independent of pre-treatment or underlying disease. This therapy should be clinically efficacious, well tolerated, and cost effective, and should prevent unnecessary development of antimicrobial resistance. 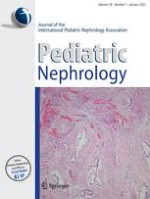 Rare causes of acute hyperkalemia in the 1st week of life