The aim of this population-level study was to determine the extent of anticholinergic exposure in older people, particularly among those receiving acetylcholinesterase inhibitors in New Zealand.

The study used data extracted from Pharmaceutical Claims Data Mart (Pharms) for the year 2011. A total of 537,387 individuals aged 65 years and older were included in the study, of whom 45.10 % were men. Individuals dispensed donepezil at any time during 2011 were selected as the acetylcholinesterase inhibitor (AChEI) group (n = 4,258) and the remainder were included in the non-acetylcholinesterase inhibitor (non-AChEI) group (n = 533,129). Anticholinergic exposure was measured using the DBI-ACh and the ADS.

Analysis of the Pharms dataset revealed that, in 2011, anticholinergic exposure as defined by the DBI-ACh and the ADS was 31.80 % and 52.66 %, respectively. The mean number of medicines dispensed was 5.64 ± 3.91 (±SD) with a 95 % confidence interval of 5.63–5.65. In the AChEI group, anticholinergic exposure using the DBI-ACh and the ADS was 42.93 % (median 0; interquartile range (IQR) 1) and 58.50 % (median 0; IQR 0), respectively. ADS level 3 medicines such as amitriptyline, nortriptyline and oxybutynin were commonly prescribed in both groups. Amitriptyline, nortriptyline, oxybutynin and paroxetine are medicines considered to have significant anticholinergic potency. Of these medicines, nortriptyline and oxybutynin were more frequently prescribed in individuals taking donepezil.

A significant proportion of older people are exposed to medicines with anticholinergic properties, including those dispensed acetylcholinesterase inhibitors. Further research is required to explore associations between different measures of anticholinergic exposure and clinically relevant outcomes in older people on a population level. 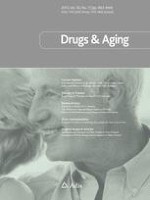 Targeted Therapy for Advanced Hepatocellular Cancer in the Elderly: Focus on Sorafenib

The Effects of Fall-Risk-Increasing Drugs on Postural Control: A Literature Review

Rheumatoid Arthritis in the Elderly in the Era of Tight Control

What Analgesics Do Older People Use Prior to Initiating Oxycodone for Non-Cancer Pain? A Retrospective Database Study

The Medication Appropriateness Index at 20: Where It Started, Where It Has Been, and Where It May Be Going