Our aim was to evaluate the safety and efficacy of a planned therapeutic withdrawal of all antihypertensive and diuretic medications, on commencing a formula low-energy diet replacement, targeting remission of type 2 diabetes.

Until recently, type 2 diabetes was viewed as a discrete endocrine disease, and its management was largely limited to prescribing medications that lower blood glucose and HbA1c, with a target, representing ‘good control’ of HbA1c < 53 mmol/mol (7%). It is well established that lowering blood glucose and HbA1c will delay or prevent microvascular complications [1‐3], but life expectancy for people with type 2 diabetes remains reduced despite best practice treatments directed at clinical guideline targets [4]. The excess morbidity and early mortality are importantly accounted for by vascular complications inherent in the underlying metabolic syndrome, and particularly related to high BP, which commonly accompanies type 2 diabetes [5].
Our understanding of type 2 diabetes is changing, as evidence accumulates that it is primarily a nutritional disease process. It is driven by weight gain; in susceptible or predisposed individuals, body fat accumulates in ectopic sites, specifically liver, pancreas and muscle including heart muscle. A linked underlying genetic or epigenetic predisposition underpins the development of hypertension and dyslipidaemia, the main features of the metabolic syndrome, and also microalbuminuria and hyperuricaemia, commonly in the same individuals. About 85% of people with type 2 diabetes have or will develop hypertension, which requires treatment under current guidelines (systolic BP [SBP] ≥140 mmHg, diastolic BP [DBP] ≥90 mmHg) [6, 7].
Anzeige
As the vascular complications of type 2 diabetes, which still affect most patients, are strongly predicted by BP, clinical guidelines now stress the need for effective antihypertensive treatments [7]. Unfortunately, some medications to treat high BP can aggravate glucose tolerance [8‐10] and some anti-obesity medications used in the past to treat type 2 diabetes can elevate BP [11, 12]. All the features of cardiometabolic conditions, including both type 2 diabetes, dyslipidaemia and hypertension, are improved by weight loss [13‐15]. However, clinicians and guidelines have been reluctant to recognise weight loss as an effective alternative treatment for hypertension in individuals who are overweight, or to consider a therapeutic trial of withdrawing antihypertensive drug treatment when effective weight management is provided.
The present study is a secondary analysis of the changes in BP and in antihypertensive medication use during the initial total diet replacement (TDR) phase in the intervention arm of the Diabetes Remission Clinical Trial (DiRECT), after a planned withdrawal of all antihypertensive and diuretic medications at the start of an evidence-based weight management programme [16]. Our aim was to determine the safety of stopping BP medications as well as the extent of BP change in each group. We also wanted to assess to what extent BP would fall with weight reduction in our non-hypertensive participants. The per-protocol withdrawal of antihypertensive medications in DiRECT was informed by observation of postural hypotension necessitating withdrawal of antihypertensive agents [17] and the subsequent early results of omitting all antihypertensive agents [18].

DiRECT study design and participants
The detailed protocol, methods and baseline clinical characteristics for DiRECT have been published in full [19, 20]. Briefly, DiRECT is a cluster-randomised, open-label clinical trial with primary care practice as the unit of randomisation. General practices representing populations with wide ranges of social and geographic features across Scotland and in the Tyneside region of England were invited to participate. Practices agreeing to participate were randomised to intervention or control. The main inclusion criteria for participants were type 2 diabetes diagnosed within 6 years, with most recent HbA1c ≥ 48 mmol/mol (6.5%), or ≥43 mmol/mol (6.1%), if on anti-diabetes medication, aged 18–65 years and BMI 27–45 kg/m2. The upper BMI limit was to allow magnetic resonance studies. Intervention and control participants continued to receive their usual diabetes care (including that related to hypertension) under current NHS guidelines and standards from NICE in England and SIGN in Scotland [21, 22]. Ethical approval was secured on 24 January 2014. All participants provided written informed consent.
Intervention
The intervention was an evidence-based weight management programme. Counterweight-Plus [16, 23] was delivered in the participants’ own general practice by the practice nurse or local dietitian who received 12 h training and ongoing mentoring in the programme from the study research dietitians. Weight loss was initiated by TDR using a low-energy, 3452–3569 kJ/day (825–853 kcal/day) formula diet for 12 weeks, extendable up to 20 weeks to allow for planned breaks and participant wishes, followed by stepped food reintroduction (FR) over 2–8 weeks, and a structured programme with monthly visits to support long-term weight loss maintenance (WLM).
Anzeige
To avoid postural hypotension during weight loss [18, 24, 25], the DiRECT protocol adopted the approach used in the Counterbalance study [18] that all antihypertensive (including diuretic) medications were withdrawn on commencement of TDR, irrespective of baseline BP or number of antihypertensive medications being prescribed. Advice to reduce dietary sodium was reinforced [19]. Multi-purpose medications such as beta-blockers were continued if they had been prescribed for an indication other than hypertension.
Blood pressure was measured (sitting and rested) at each intervention visit (1 week after start of TDR then every 2 weeks until the end of FR and monthly thereafter). A pre-specified protocol (Table 1) based on current national clinical guidelines [7, 22] was applied for medication reintroduction if SBP exceeded 165 mmHg (during weeks 1 or 2 of TDR) or 140 mmHg subsequently. There was no pre-planned testing for postural hypotension by lying/standing BP.
Table 1
Protocol for reintroduction of antihypertensive medications
For participants whose glycaemic control deteriorated, anti-diabetes medications were also reintroduced [19]; medications such as GLP-1 agonists that reduce BP were not used. A checklist of possible side effects related to TDR, including dizziness, was completed at each study visit.
Statistical analysis
Post hoc analysis was performed using paired t tests for changes in BP and weight for intervention participants who commenced TDR (n = 143), for the subset with known hypertension who had previously been prescribed antihypertensive medications and discontinued them when starting TDR (n = 69), for those stopping 1 (n = 33) or ≥2 drugs (n = 36) at commencement of TDR and for those with no history of hypertension.
To model changes over time, linear mixed effects regression models were used to predict changes in SBP and DBP and changes in weight from week of visit, treating week of visit as a categorical variable. All models adjust for baseline value of the outcome, age, sex, study centre, practice list size and a random patient effect. Analyses were carried out using SPSS (V24) and R (V3.6.2).
Participants for whom the 12- and/or 24-month remission status was not known were assumed not to have achieved remission, in line with the primary analysis of the study. Missing values in other variables were not imputed.

We are enormously grateful to the general practices, healthcare professionals and volunteers for their participation in DiRECT.

The study funder was not involved in the design of the study; the collection, analysis, and interpretation of the data; writing the report; and did not impose any restrictions regarding the publication of the report. 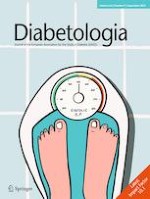 The effect of morning vs evening exercise training on glycaemic control and serum metabolites in overweight/obese men: a randomised trial

HDL and type 2 diabetes: the chicken or the egg?

Replication and cross-validation of type 2 diabetes subtypes based on clinical variables: an IMI-RHAPSODY study