Leukotrienes (LTs) are a family of inflammatory mediators including LTA4, LTB4, LTC4, LTD4, and LTE4. By competitive binding to the cysteinyl LT1 (CysLT1) receptor, LT receptor antagonist drugs, such as montelukast, zafirlukast, and pranlukast, block the effects of CysLTs, improving the symptoms of some chronic respiratory diseases, particularly bronchial asthma and allergic rhinitis. We reviewed the efficacy of antileukotrienes in upper airway inflammatory diseases. An update on the use of antileukotrienes in upper airway diseases in children and adults is presented with a detailed literature survey. Data on LTs, antileukotrienes, and antileukotrienes in chronic rhinosinusitis and nasal polyps, asthma, and allergic rhinitis are presented. Antileukotriene drugs are classified into two groups: CysLT receptor antagonists (zafirlukast, pranlukast, and montelukast) and LT synthesis inhibitors (5-lipoxygenase inhibitors such as zileuton, ZD2138, Bay X 1005, and MK-0591). CysLTs have important proinflammatory and profibrotic effects that contribute to the extensive hyperplastic rhinosinusitis and nasal polyposis (NP) that characterise these disorders. Patients who receive zafirlukast or zileuton tend to show objective improvements in, or at least stabilisation of, NP. Montelukast treatment may lead to clinical subjective improvement in NP. Montelukast treatment after sinus surgery can lead to a significant reduction in eosinophilic cationic protein levels in serum, with a beneficial effect on nasal and pulmonary symptoms and less impact in NP. Combined inhaled corticosteroids and long-acting β-agonists treatments are most effective for preventing exacerbations among paediatric asthma patients. Treatments with medium- or high-dose inhaled corticosteroids, combined inhaled corticosteroids and LT receptor antagonists, and low-dose inhaled corticosteroids have been reported to be equally effective. Antileukotrienes have also been reported to be effective for allergic rhinitis. 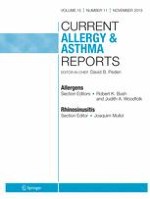 Use of Humanized Rat Basophilic Leukemia Reporter Cell Lines as a Diagnostic Tool for Detection of Allergen-Specific IgE in Allergic Patients: Time for a Reappraisal?

Surgical Versus Medical Interventions in CRS and Nasal Polyps: Comparative Evidence Between Medical and Surgical Efficacy

The Role of the Skin Microbiome in Atopic Dermatitis