Antimicrobials are extensively used as growth promoters in animal feeds worldwide, but reliable estimates are lacking. We conducted an internet-based survey of commercial chicken and pig feed products officially approved for sale in Vietnam over the period March–June 2015. Information on the antimicrobial contents in feed products, alongside animal production data, was used to estimate in-feed antimicrobial consumption to produce one kilogram of live animal (chicken, pig), as well as to estimate country-wide antimicrobial consumption through animal feeds. A total of 1462 commercial feed formulations were examined. The survey-adjusted estimated antimicrobial contents were 25.7 and 62.3 mg/kg in chicken and pig feeds, respectively. Overall, it was estimated that 77.4 mg [95% CI 48.1–106.8] and 286.6 mg [95% CI 191.6–418.3] of in-feed antimicrobials were used to raise 1 kg of live chicken and pig, respectively. Bacitracin (15.5% feeds), chlortetracycline (11.4%), and enramycin (10.8%) were the most common antimicrobials present in chicken feed formulations, whereas bacitracin (24.8%), chlortetracycline (23.9%), and florfenicol (17.4%) were the most common in pig feed formulations. Overall, 57% of the total quantitative usage consisted of antimicrobials regarded by WHO of importance for human medicine, including amoxicillin, colistin, tetracyclines, neomycin, lincomycin, and bacitracin. These figures confirm a very high magnitude of in-feed consumption of antimicrobials, especially in pig production. Results from this study should encourage further monitoring of antimicrobials used in animal production, and foster discussion about existing policies on inclusion of antimicrobials in animal feed rations. 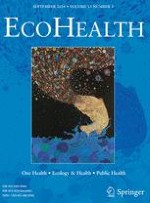 CITES: In Sickness and in Health?