A cross-sectional observation and an intervention study were conducted in Chittagong, Bangladesh in 2015 to assess the status of antimicrobial residues in chicken and fish. The samples were tested for selected antimicrobials (amoxicillin, ciprofloxacin, oxytetracycline and enrofloxacin) using thin-layer chromatography (TLC). The TLC-based overall prevalence of residues was 87.9% in chicken (N = 182) and 56.9% in fish (N = 153). The prevalences in chicken in June (N = 91) and in October (N = 91), respectively, were 91.2% and 83.5% (amoxicillin), 1.1% and 1.1% (enrofloxacin), 1.1% and 0% (ciprofloxacin), and 0% and 6.6% (oxytetracycline). In fish, the prevalence in September (N = 74) and in October (N = 79) was 52.7% and 44.3% (amoxicillin) and 1.4% and 27.8% (oxytetracycline), respectively. The mean concentration of amoxicillin residue was evaluated by ultra-high-performance liquid chromatography to be 508.4 mg/kg (chicken) and 515.4 mg/kg (fish). The random effect model identified market (Chawkbazar vs. Boalkhali: OR 5.7; Steelmill bazar vs. Boalkhali: OR 5.6) as significant factors for amoxicillin residue in chicken. Amoxicillin concentration was significantly reduced in chicken of Kazirhat (β= − 1.3) and Chawkbazar (β= − 1.1) and increased in October (β= 0.77) based on a generalized linear model (GLM). Climbing perch fish had significantly more risk of having amoxicillin residue than that of Bombay duck (OR = 0.05). All samples were treated by washing, boiling and cooking with spices, and then, TLC-based screening of amoxicillin residues was done. A subset of each treated group was evaluated by UHPLC. Treatment reduced amoxicillin residue levels significantly. 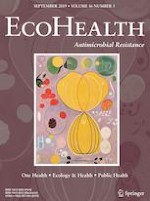 Temporal and Spatial Dynamics of Monkeypox in Democratic Republic of Congo, 2000–2015

EcoHealth Action Over Lifetimes: Unity of Spirit, Voice, and Deeds