The recognized biological properties of Ginkgo biloba extracts potentiate their utilization as an ingredient for functional foods. However, the digestive conditions can affect the chemical composition of the extracts and consequently their biological properties, which can lead to food safety problems. Thus, the impact of in vitro-simulated upper gastrointestinal tract digestion on the chemical composition and bioactivity of Ginkgo biloba leaf extract (GBE) was evaluated.

Physicochemical conditions of human digestion were simulated in vitro, and its impact on the chemical composition of GBE was investigated by electrospray ionization-mass spectrometry. The persistence of bioactivity was investigated by subjecting GBE and the in vitro digested extract (DGBE) to the same methodology. Antioxidant properties were assessed using 2′,7′-dichlorofluorescein diacetate to measure the intracellular oxidation of Schizosaccharomyces pombe cells pre-incubated with GBE or DGBE and exposed to H2O2. Antigenotoxicity was tested by comet assay in HT-29 colon cancer cells pre-incubated with GBE or DGBE and challenged with H2O2.

The chemical analysis revealed a considerable change in chemical composition upon digestion. Pre-incubation with GBE or DGBE attenuated the H2O2-imposed intracellular oxidation in wild-type S. pombe cells, unlike the oxidative stress response-affected mutants sty1 and pap1, and decreased H2O2-induced DNA damage in HT-29 cells. The extracts did not induce toxicity in these eukaryotic models.

The chemical composition of GBE was affected by in vitro digestion, but the antioxidant and antigenotoxic activities persisted. Therefore, G. biloba extract may be suitable for use as food additive and contribute to a healthy colon. 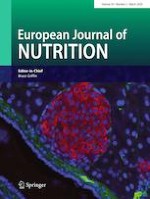 Consumption of a soy drink has no effect on cognitive function but may alleviate vasomotor symptoms in post-menopausal women; a randomised trial

Breast and complementary feeding in Ethiopia: new national evidence from systematic review and meta-analyses of studies in the past 10 years: reply

Systematic review of breast and complementary feeding in Ethiopia: a commentary