The online version of this article (doi:https://​doi.​org/​10.​1007/​s10461-019-02488-7) contains supplementary material, which is available to authorized users.
Previous presentation A version of this work was presented at the 12th International Conference on HIV Treatment and Prevention Adherence, Miami FL, June 4–6, 2017.

Many people living with HIV (PLWH) pass through correctional facilities each year, a large proportion of whom do not maintain viral suppression following release. We examined the effects of imPACT, an intervention designed to promote post-release viral suppression, on antiretroviral therapy (ART) adherence. PLWH awaiting release from prisons in two southern states were randomized to imPACT (consisting of motivational interviewing, care linkage coordination, and text message medication reminders) versus standard care (SC). ART adherence, measured by unannounced monthly telephone pill counts, was compared between study arms over 6 months post-release. Of 381 participants eligible for post-release follow-up, 302 (79%) completed ≥ 1 of 6 possible pill counts (median: 4; IQR 1–6). Average adherence over follow-up was 80.3% (95% CI 77.5, 83.1) and 81.0% (78.3, 83.6) of expected doses taken in the imPACT and SC arms, respectively. There was no difference between arms when accounting for missing data using multiple imputation (mean difference = − 0.2 percentage points [− 3.7, 3.3]), controlling for study site and week of follow-up. Of the 936 (40.9%) pill counts that were missed, 212 (22.7%) were due to re-incarceration. Those who missed pill counts for any reason were more likely to be unsuppressed, suggesting that they had lower adherence. However, missingness was balanced between arms. Among PLWH released from prison, ART adherence averaged > 80% in both study arms over 6 months—a level higher than seen with most other chronic diseases. However, missing data may have led to an overestimate of adherence. Factors independent of the intervention influence ART adherence in this population and should be identified to inform future targeted interventions. 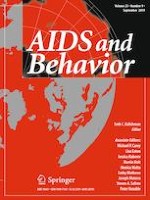 Cognitive Behavioral Therapy for Trauma and Self-Care (CBT-TSC) in Men Who have Sex with Men with a History of Childhood Sexual Abuse: A Randomized Controlled Trial

Facilitators and Barriers to Adherence to Antiretroviral Therapy and Retention in Care Among Adolescents Living with HIV/AIDS in Zambia: A Mixed Methods Study

Incentives for Viral Suppression in People Living with HIV: A Randomized Clinical Trial

The Impacts of Residential Location on the Risk of HIV Virologic Failure Among ART Users in Durban, South Africa