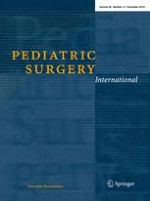 How did the surgeons treat neonates with imperforate anus in the eighteenth century?