Diffusion-weighted imaging is a valuable tool in the assessment of the neonatal brain, and changes in diffusion are seen in normal development as well as in pathological states such as hypoxic–ischemic encephalopathy (HIE). Various methods of quantitative assessment of diffusion values have been reported. Global ischemic injury occurring during the time of rapid developmental changes in brain myelination can complicate the imaging diagnosis of neonatal HIE.

To compare a quantitative method of histographic analysis of brain apparent coefficient (ADC) maps to the qualitative interpretation of routine brain MR imaging studies. We correlate changes in diffusion values with gestational age in radiographically normal neonates, and we investigate the sensitivity of the method as a quantitative measure of hypoxic–ischemic encephalopathy.

We reviewed all brain MRI studies from the neonatal intensive care unit (NICU) at our university medical center over a 4-year period to identify cases that were radiographically normal (23 cases) and those with diffuse, global hypoxic–ischemic encephalopathy (12 cases). We histographically displayed ADC values of a single brain slice at the level of the basal ganglia and correlated peak (s-sDav) and lowest histogram values (s-sDlowest) with gestational age.

Normative s-sDav values correlated significantly with gestational age and declined linearly through the neonatal period (r 2 = 0.477, P < 0.01). Six of 12 cases of known HIE demonstrated significantly lower s-sDav and s-sDlowest ADC values than were reflected in the normative distribution; several cases of HIE fell within a 95% confidence interval for normative studies, and one case demonstrated higher-than-normal s-sDav.

Single-slice histographic display of ADC values is a rapid and clinically feasible method of quantitative analysis of diffusion. In this study normative values derived from consecutive neonates without radiographic evidence of ischemic injury are correlated with gestational age, declining linearly throughout the perinatal period. This method does identify cases of HIE, though the overall sensitivity of the method is low. 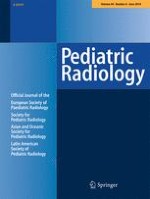 Partnering with centers of excellence in high- and low–middle-income countries: a strategy to strengthen child health globally

International pediatric radiology education: who should be trained, and how?

Rotator cuff tears in children and adolescents: experience at a large pediatric hospital