Appendectomy for acute appendicitis is the most common emergency surgical procedure, with more than 130,000 operations per year in Germany. More than half of these operations are nowadays performed laparoscopically [ 1]. Several studies and a systematic review have demonstrated at least equivalence for laparoscopic and open appendectomy [ 2, 3]. Less postoperative pain, reduced wound infections, faster recovery and shorter hospital stay have been shown to be advantageous in laparoscopic compared with open appendectomy. Disadvantages of the laparoscopic operation are, besides longer procedure times, a marginally higher intra-abdominal abscess rate and higher costs [ 4– 6]. Both latter factors are inevitably influenced by the technique of stump closure. Different ways of closing the appendix stump in laparoscopic appendectomy have been described [ 7, 8]. Mainly two techniques are used: first, using the Roeder loop, a pre-tied sliding knot, which is applied to both sides of the dissection line of the appendix [ 9, 10]; second, dissection and closure with a linear stapler (Endo GIA) [ 7]. Some data suggest that the stapling technique results in the safest closure of the stump, but it is also the most expensive method [ 7]. Recent studies have described the use of non-absorbable plastic clips [ 11, 12]. Advantages of these clips were easy application and low costs. Due to their size, these clips are limited to an appendix base smaller than 10 mm. In the presented pilot study, we used a titanium double-shanked clip (DS-Clip). The aim was to investigate the safety and feasibility of the clip as an alternative for stump closure.

Two hospitals included patients into this prospective study: the county hospital Schwarzwald-Baar-Klinikum and the University Hospital Mannheim. The projected aim was to include 50 patients per hospital for the outcome analysis. From June 2008 to February 2010, 104 patients undergoing laparoscopic appendectomy in the two participating hospitals were screened for the study. The surgeons were instructed to always use the clip; only in cases where they intraoperatively felt that the technique was not suitable for adequate closure of the stump they could use another device (i.e. in case of a very broad appendix base or in a severely inflamed appendix with involvement of the caecum). All operations were done by a board certified surgeon or by a surgical trainee (first to sixth year of surgical training) under supervision of the former.
Anzeige
The data collected included age, gender, operation time, complications, management of complications, hospital stay, (histological) type of appendicitis and diameter of appendix base. The histological findings were divided into five groups: (1) no signs of acute inflammation, (2) phlegmonous appendicitis, (3) ulcero-phlegmonous appendicitis, (4), gangrenous appendicitis and (5) chronic appendicitis. Data were recorded prospectively and entered into a database.
Every surgeon had to fill in a standardised form describing the intraoperative situation and the clip application. The features of the clip were rated by answering the following questions by grading them from “1” for excellent to “4” for poor:
1.
How do you judge the fitting of the clip?
2.
How do you judge the view on the applicator and the clip?
3.
How do you judge the handling of the clip and the applicator?
4.
Overall rating of the clip
The operation followed a standardised course. The patients were placed in supine position with the surgeon and assistant standing on the left side and the monitor on the right. The camera trocar was introduced in an open technique according to Hasson [ 13]. After establishing a pneumoperitoneum, a 5-mm trocar was introduced in the right lower abdomen and a 12.5-mm trocar was introduced in the left lower abdomen under vision. After exploration of the whole abdominal cavity and confirmation of the diagnosis, the appendix was mobilised by dissecting the mesoappendix with electric coagulation. Only in cases with a very large artery a clip was applied. A clip was then placed on the base of the appendix. Another clip was placed on the distal part (Fig.  1). After cutting between the clips, the appendix was removed through the 12.5-mm trocar.
The titanium double-shanked clip (DS-Clip) was provided by Aesculap AG (Tuttlingen, Germany). It is a pure titanium clip with two parallel shanks which are connected in the tip area of the clip (Fig.  2). The clip has to be applied with a reusable specific clip applicator and the closing mechanism initiates at the tip of the clip, which should reduce slipping off from any grasped tissue.
×
×
Anzeige
Statistical analyses were performed using SPSS for Windows 15.0 (SPSS Inc., Chicago, IL, USA). Fisher's exact test was used for qualitative and the t test for normally distributed data.

Of the 104 patients screened for this prospective observational study, 100 patients were finally included in the study (59 females, 41 males). In four cases the clip was not used because the surgeon thought it was not suitable due to severe inflammation of the appendix bases with involvement of the caecum; in these patients either a stapler (Endo GIA) or a Roeder loop was used.
The median age was 30.6 years (range, 13–84 years). The median operation time was 54 min (range, 26–109 min). Clinical findings showed phlegmonous appendicitis in 72%, gangrenous appendicitis in 19% and no macroscopic signs of inflammation in 9%. Of the 19 patients with gangrenous appendicitis, eight had a perforation and five a perityphlitic abscess. In case of macroscopic non-inflamed appendix and no other obvious abdominal pathology explaining right lower quadrant pain, our policy is to still remove the appendix in order to rule out other causes of pain such as neurogenic appendicitis. In this study, four patients had laparoscopy for chronic lower right abdominal pain. In one patient an enlarged, non-inflamed appendix was removed; here histology revealed a neuroendocrine tumour.
The histological findings are shown in Fig.  3. The clip was applied in 23 cases onto an inflamed appendix base. The median diameter of the appendix base was 10 mm (range, 5–15 mm). The maximum diameter of the appendix was 15 mm.
×
The rate of surgical complications requiring specific treatment was 3%. One abdominal abscess was treated by interventional drainage. One patient experienced a prolonged small bowel obstruction, which resolved under conservative treatment (nasogastric tube, bowel stimulation). One wound infection occurred, which resolved under antibiotic therapy. All of these complications occurred in the 13 patients with perforated appendicitis or a perityphlitic abscess. The complication rate in this group was 20% compared to 0% in patients with uncomplicated appendicitis ( p = 0.004).
The median postoperative hospital stay was 4 days (range 2–19 days). Overall, 22% of the operations were done by surgical trainees. Patient characteristics and results are shown in Table  1.
Table 1
Characteristics and outcome of all patients undergoing laparoscopic appendectomy and stump closure with a titanium double-shanked clip (DS-Clip)
Statistically significant differences between the two hospitals were found in regard to age, number of operations done by surgical trainees (8% in the county hospital vs. 36% in the university hospital) and procedure time (45 vs. 62 min in favour of the county hospital) (Table  2). The evaluation of the clip by the operating surgeons is shown in Fig.  4 with an overall judgement of the clip of 49% “excellent”, 49% “good”, and 2% “average”.
Table 2
Characteristics and outcome of patients undergoing laparoscopic appendectomy and stump closure with a titanium double-shanked clip (DS-Clip) stratified according to hospital
×

Laparoscopic compared to open appendectomy has been shown to be advantageous in regard to early postoperative parameters such as postoperative pain and recovery of bowel function and also harbours a lower wound infection rate. But there is concern that there may be a higher rate of intra-abdominal abscesses, especially in perforated appendicitis [ 14]. Possible reasons for this observed trend in the studies are dissemination of infectious material throughout the abdomen during pneumoperitoneum and the non-inversion of the appendix stump as generally done in open appendectomy. The technique of stump closure may play an important role in this context [ 4].
Anzeige
Most surgeons use either a linear stapler (endo GIA) or an endo loop to secure the appendix base. Two systematic reviews have compared these two techniques [ 7, 8]. Both manuscripts revealed shorter procedure times, lower rates of wound infection and postoperative ileus in favour of the stapler group; overall perioperative complication rates and hospital stay were comparable. The endo-loop technique was significantly less costly. Although both reviews yielded similar results, different conclusions were drawn. While Kazemier et al. generally recommend the use of staplers, Sajid et al. concludes that Endo loops may safely be used and are preferable for securing the appendix stump [ 7, 8].
Recently, the application of clips as an alternative option to close the appendix base in laparoscopic appendectomy has been described. Clips are quite commonly used in laparoscopic surgery, i.e. for the ligation of vessels or the cystic duct. Several papers describe the use of polymeric non-absorbable clips (Hem-o-lok) as a safe, feasible and cost-effective method [ 11, 12, 15]. In these studies one or two clips are placed onto the appendix stump. The largest, recommended diameter of the appendicular stump that can be safely closed with this clip is 10 mm. However, the base of the appendix may often exceed this diameter in acute inflammation. In our study we used a titanium double-shanked clip (DS-Clip). One clip was applied to the appendix base and another to the distal part which was removed. Appendix stumps with a diameter of up to 20 mm could be safely closed. Due to the design of the clip as a double-shanked clip, application of only one clip on each side was generally sufficient. An obvious advantage of the titanium clip in comparison to other commercially available clips is the size which allows closure of an appendix base larger than 10 mm. Moreover, due to its closing mechanism, which first closes at the distal end and then gradually approximates between both ends, the phenomenon of “pushing out” of the tissue, in this case the appendix, can be diminished. In 23% of the cases, the inflammation involving the appendix stump and the clip could still be used without major problems. The size of the applicator requires a 12.5-mm trocar, which is equivalent to the trocar size needed when using a stapler. However, in comparison to the other commercially available clips, which go through a 10-mm trocar, this is a certain drawback. The fascias in 12.5-mm trocar incisions generally need to be closed in order to prevent trocar hernias; 10-mm trocar incisions are generally not closed.
The objective parameters in our study such as complication rate, procedure time and length of hospital stay were well comparable to other studies using staplers, endo loops or polymeric non-absorbable clips for appendix stump closure [ 2, 12, 15]. None of the complications in the presented study required re-operation.
As complications only occurred in patients with perforated appendicitis or a perityphlitic abscess, the question arises whether the clip is also safe in these patients. The single patient with a postoperative intra-abdominal abscess was treated by interventional drainage. Therefore it remains unclear whether the abscess was indeed caused by leakage of the appendiceal stump or was the result of ongoing local peritonitis. But even if the former was the case, the overall complication rate in the sub-group of perforated appendicitis in our series is well comparable to the complication rate in other studies [ 11, 15]. Therefore these complications are probably not a result of the clip per se, but merely reflect the more difficult situation in complicated appendicitis.
Anzeige
Besides these objective variables, the subjective rating of the surgeons which used the DS-Clip was positive in regard to handling, visualization and fitting of the clip. The study also shows that the clip is well applicable in the setting of a teaching hospital with a high percentage of operations being done by surgical trainees.
Finally, compared to the use of linear staplers, the application of two to three of such clips will significantly reduce the costs. The pricing for a set of four clips is predicted to be around 80 € depending on the region. Further studies with a larger patient number will have to confirm the safety of the new clip and also investigate the possible cost advantage.

This study suggests that the presented titanium double-shanked clip is a safe and cost-effective technique for securing the appendix base in laparoscopic appendectomy. An appendix base with a diameter of up to 20 mm can be adequately closed, which is a possible advantage in comparison to other commercially available clips. The application is easy and can be learned quickly, making it a good option also for teaching hospitals. 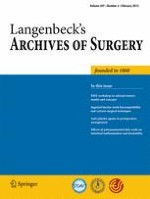