A major task of forensic investigations is the documentation and interpretation of evidence to reconstruct a forensically relevant incident. To accomplish this task, a scene is documented not only with photographs but also with 3D documentation technologies. The resulting 3D data are used for 3D visualization and to perform 3D reconstructions. In this article, we present an approach for using forensic 3D data in conjunction with virtual reality to perform scene walkthroughs in the context of witness or suspect interrogations. The aim is to provide a method for scene visits showing the original scene even years after the incident. These scene walkthroughs in VR can be reproduced and allow to see through the eyes of a witness by recording their behavior and actions. These recordings allow subsequent examinations and reconstruction to support the investigation and scene understanding and can be used as evidence in court. 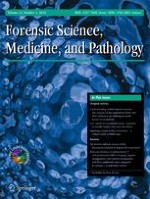