Thoracic esophageal cancer is an aggressive cancer characterized by rapid and extensive progression and a poor prognosis [ 1, 2]. The surgery for this disease is a complex procedure that requires extensive lymph node dissection, from the neck to the abdomen, and reconstruction over a long distance in the mediastinum using stomach or colon/jejunum [ 1, 3]. Moreover, the preoperative chemotherapy and/or radiotherapy usually administered in cases of Stage II–IVa esophageal cancer in an effort to improve survival outcome induces additional surgical stress and complications in the patient [ 4, 5]. Consequently, esophagectomy for esophageal cancer requires a surgeon with experience in the relevant surgical techniques and a well-trained staff administering perioperative care.
Since 2013, the Japan Esophageal Society has been certifying “Authorized Institute for Board Certified Esophageal Surgeon” (AIBCES) to contribute to improving national medical care by enhancing the professional knowledge and skills of esophageal surgeons. It is mandated that AIBCES are facilities that provide surgeons with education and training toward becoming a board-certified esophageal surgeon. Although many board-certified esophageal surgeons have emerged through training at an AIBCES, the Japan Esophageal Society has not yet verified the appropriateness on this certification system.
Anzeige
The purpose of the present study is to verify the appropriateness of the certification system for AIBCES by the Japan Esophageal Society. To do so, we used the National Database of Hospital-based Cancer Registries to examine survival outcomes among patients with thoracic esophageal cancer who underwent an esophagectomy at an AIBCES or a non-AIBCES.

The Japan Esophageal Society began certifying AIBCES in 2013. The provisions for certification include (1) more than 100 patients diagnosed or treated in hospital and more than 50 surgeries for esophageal disease within a period of 5 years, (2) employment of full-time, board-certified esophageal surgeons, (3) presence of a training curriculum for board-certified esophageal surgeons, (4) radiation therapy is fully established, (5) autopsy and rapid pathological diagnosis are fully established, (6) continuous performance of education (case conferences, death conferences, and so on) in esophagology, (7) performance of relevant research (report articles, presentations at the annual meeting of the Japan Esophageal Society), and (8) contribution to the Comprehensive Registry in Esophageal Cancer in Japan. First, selection of AIBCES was deliberated in 2012 and delivered in 2013. This means that AIBCES certified in 2013 were selected based on research and clinical achievements during 2007–2011, which included the patients treated in 2008. Sixty-eight facilities were certified in 2013. Another 45 facilities were then certified in 2014 based on research and clinical achievements during 2008–2012, which also included the patients treated in 2008.

We retrieved 2008 data from the National Database of Hospital-based Cancer Registries along with 5-year survival information from the National Cancer Center, Tokyo, Japan [ 6]. There were 428,195 cases of cancer listed in the 2008 Hospital-based Cancer Registry. The registry data include the following information on individual cancer patients: (1) clinical profiles, including birth date, sex, tumor topology, and histology code according to the International Classification of Disease for Oncology, third edition (ICD-O-3); (2) clinical and pathological tumor–node–metastasis (TNM 6th Edition) stage based on the Union for International Cancer Control (UICC); (3) diagnosis date; (4) first-line treatment details; and (5) survival information (follow-up time after diagnosis of cancer). We extracted the data for patients diagnosed with thoracic esophageal cancer (C151, C153–155) and treated surgically at a registered hospital for thoracic esophageal cancer, and for patients diagnosed at another hospital but treated surgically at a registered hospital for thoracic esophageal cancer.

We divided the patients into two groups, those who underwent surgery at an AIBCES (certified in 2013 or 2014) or a non–AIBCES and analyzed the patient backgrounds and 5-year survival rates in the two groups.
Anzeige
Statistical comparisons between patients in the AIBCES and non-AIBCES groups were carried out using Student’s t test, the Chi squared test, Fisher’s exact test, or the Wilcoxon-type test for trend, depending on the type and distribution of the variables. Overall survival was characterized using Kaplan–Meier plots. Survival curves were compared between the two groups using log-rank tests. Unadjusted Cox proportional hazards models were used to estimate the hazard ratios for the treatment at AIBCES, along with demographic, oncologic, and adjuvant therapy factors. Incidence rate ratios were calculated for T classification (T3–4 vs. Tis-2), N classification (N1–3 vs. N0), clinical stages, and adjuvant therapies because these variables failed to meet the assumption of proportionality. A multivariate Cox proportional hazards regression model was developed to evaluate the effect of treatment at an AIBCES on survival after adjusting for age, sex, stratification of clinical stages, and adjuvant therapies. Stratification of clinical stages and adjuvant treatments was used to control for the effects of these variables without assuming proportional hazards. A two-sided value of p = 0.05 was set to define statistical significance. We performed all statistical operations using Stata 14-MP (StataCorp LP, College Station, TX, USA).

This study was approved by the Ethics Committee of Akita University Graduate School of Medicine (No. 1920).
Anzeige

There are no financial or other relations that could lead to a conflict of interest.
Open AccessThis article is distributed under the terms of the Creative Commons Attribution 4.0 International License ( http://​creativecommons.​org/​licenses/​by/​4.​0/​), which permits unrestricted use, distribution, and reproduction in any medium, provided you give appropriate credit to the original author(s) and the source, provide a link to the Creative Commons license, and indicate if changes were made. 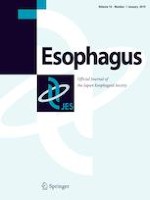