Are the tubular grafts in the femoral tunnel in an anatomical or isometric position in the reconstruction of medial patellofemoral ligament? | springermedizin.de Skip to main content
TOOLBAR 1 2 3 4
SUCHE MENÜ 1 2 3 4

The purpose of this study was to evaluate the biomechanical results from the in vitro reconstruction of medial patellofemoral ligament (MPFL) using a navigation-assisted technique on a cadaveric model and its effects on patellar stability and kinematics. The authors investigated the hypothesis that patellar kinematics after reconstruction with a tubular graft are not optimal when compared with the original fan-shaped MPFL.

In six fresh-frozen cadaveric knees, lateral loads (25 N) were applied on the patella at 0°, 30°, 60° and 90° of knee flexion in three different MPFL states: intact, cut and reconstructed. The arrangement allowed positional measurements of patellar motion to be tracked in six degrees of freedom. Medial to lateral patellar translation and patellar tilt were recorded. The kinematics after a technique of MPFL reconstruction, performed with a gracilis tendon in a blind femoral tunnel guided by navigation, were compared against kinematics recorded in the MPFL intact state. A temporary fixation of adequate tension to engage the lateral patellar facet in extension was applied to the MPFL and, after graft cycling, the final fixation was done at 70° knee flexion with an interference screw.

The study confirmed the major role of the MPFL in case of medial loading between 0° and 60°, by focusing on the importance of kinematically identifying the proper femoral point for fixation. While the study demonstrates the importance of kinematic determination of the proper femoral point of fixation, as the anatomical insertion remains difficult to identify. Even in dissected cadavers, the authors recorded a slightly anterior placement than native MPFL. After reconstruction, patellar stability in terms of lateral translation and tilt was similar to the intact MPFL, but patellar kinematics were not optimal with the use of a smaller and tubular graft than the native wider and fan-shaped MPFL. 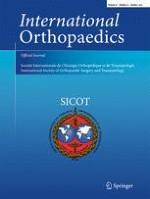 The analysis of spinopelvic parameters and stability following long fusions with S1, S2 or iliac fixation

One hundred and fifty years of history of the Morse taper: from Stephen A. Morse in 1864 to complications related to modularity in hip arthroplasty