Are there gender differences in associations of effort–reward imbalance at work with self-reported doctor-diagnosed depression? Prospective evidence from the German Socio-Economic Panel | springermedizin.de Skip to main content
TOOLBAR 1 2 3 4
SUCHE MENÜ 1 2 3 4

Cohort studies established elevated risks of depression among employees experiencing psychosocial stress at work, defined by ‘job strain’ or ‘effort–reward imbalance’ (ERI). Yet, conflicting evidence exists on whether the strength of these associations varies by gender. We explore this question in a nationally representative sample of working women and men where work stress (ERI) was related to reported depression over a 2-year follow-up.

Data were derived from the panel waves 2011 and 2013 of the German Socio-Economic Panel. Work stress was assessed by validated short scales of the ERI questionnaire, and doctor-diagnosed depression reported in 2013 (after excluding cases reported in 2011) was used as outcome variable. The sample with full data in 2013 consisted of 6693 participants (49.4% women).

In 2011, men scored significantly higher than women on the scale ‘effort’ and on the ‘effort–reward ratio’, whereas no significant gender differences for ‘reward’ and ‘over-commitment’ were observed. Women reported a diagnosed depression almost twice as often as men (4.2 vs. 2.6%). Associations of all ERI scales with depression were statistically significant, with no noticeable differences in the strength of associations between women and men. Risk of depression was higher among men and women with effort–reward imbalance [RR (risk ratio) of 1.82; 95% CI (confidence interval) 1.36–2.44 and RR of 1.88; 95% CI 1.51–2.33, respectively].

Despite higher effort and slightly higher effort–reward ratio among men interaction terms between gender, work stress and depression were generally not significant. While gender inequities in the labour market are persisting stress-reducing worksite health promotion programs should apply equally for men and women. 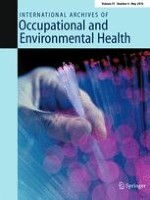 Do frequent exposures to threats and violence at work affect later workforce participation?

Working (longer than) 9 to 5: are there cardiometabolic health risks for young Australian workers who report longer than 38-h working weeks?