AK, DV and TB conceived the study, participated in its design. AK and EV participated in coordination of the trial. EV were responsible for data collection and data management. AK and DV performed the statistical analysis. AK contributed significantly by writing the entire manuscript. ZD, DV, TB and EV contributed to the manuscript by critically evaluating study design, data interpretation as well as critically revising the manuscript. All authors read and approved the final manuscript.

Rescuers are often unable to achieve the recommended 5–6 cm CC depth. The physical limitations of elderly bystanders may affect the quality of CC; thus, we investigated new strategies to improve CC performance.

We performed a randomized controlled trial in December 2013. Sixty-eight lay rescuers aged 50–75 were randomized to intervention or control pairs (males and females separately). Each pair performed 8 min of DA-CPR on a manikin connected to a PC. Each participant in every pair took turns performing CCs in cycles of 2 min and switched as advised by the dispatcher. In the middle of every 2-min cycle, the dispatcher asked the participants of the intervention group to perform the Andrew’s manoeuvre (to push on the shoulders of the person while he/she performed CCs to achieve deeper CC). Data on the quality of the CCs were analysed for each participant and pair.

The largest group of out-of-hospital cardiac arrest occurred in males over the age of 60 at home, and accordingly, the most likely witness, if any, is the spouse or family member, most frequently an older woman. There is a growing body of evidence that female rescuers are frequently unable to achieve sufficient CC depth compared to male rescuers. In some instances, the adequate depth of the CCs could only be reached using four hands, with the second pair of hands placed on the shoulders of the rescuer performing CPR. 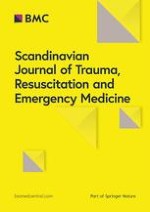 Four ways to ventilate during cardiopulmonary resuscitation in a porcine model: a randomized study

The pre-hospital administration of tranexamic acid to patients with multiple injuries and its effects on rotational thrombelastometry: a prospective observational study in pre-hospital emergency medicine