To investigate whether single-nucleotide polymorphisms (SNPs) known to be strongly associated with the development of age-related macular degeneration (AMD) have an influence on recurrence rate of choroidal neovascularization (CNV) activity during 4-year ranibizumab treatment for exudative AMD.

This prospective study included 103 treatment-naïve patients (103 eyes) that received initially a loading dose of 3 monthly ranibizumab injections and thereafter, were treated according to an as-needed regimen for a 4-year follow-up period. Baseline values, visual outcome, and recurrence rate were examined. CFH Y402H and ARMS2 A69S polymorphisms were determined and their association with lesion recurrence and visual outcome was analyzed using a one-way analysis of variance (ANOVA) with post hoc comparison tested by Fisher’s LSD method. Multivariate linear regression analysis was then used to identify factors associated with recurrence rate.

The cumulative total mean number of ranibizumab injections at the end of each year of the follow-up was 5.3 ± 1.8, 9.2 ± 2.9, 12.6 ± 4.6, and 15.7 ± 6.1. There was great inter-patient variability. Nineteen eyes (18.5%) did not experience recurrence during the first year, and five (4.8%) still displayed inactive CNV after 4 years of follow-up. No significant association was found between the number of injections and mean best corrected visual acuity (BCVA) change or final BCVA at the end of the study period. Genotypes had no influence on baseline characteristics or visual outcome but a significant association was found between the A69S polymorphism and the number of injections needed by the patients. Homozygous for the T risk allele required more retreatments over the 48-month follow-up.

The ARMS2 A69S polymorphism was associated with CNV recurrence rate in our patient cohort. Prediction of a greater risk of recurrence could help to design more appropriate follow-up treatment strategies for patients with neovascular AMD. 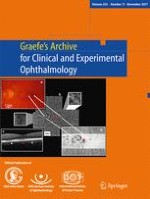