There is evidence that the link between obesity and cardiovascular disease might relate to inflammation in both fat tissue and the arterial wall. 18F-FDG uptake on PET is a surrogate marker of vessel wall inflammation. The aim of the study was to measure FDG uptake in both regions using PET and identify links between adipose and arterial inflammation.

Included in the study were 173 cardiovascular patients who were prospectively imaged with FDG PET/CT. Arterial FDG uptake was measured in the carotid arteries and ascending aorta. The same was done in fat tissue in the neck, the presternal region (both subcutaneous) and the pericardium. FDG uptake was quantified as average maximal target-to-background ratio (meanTBRmax). Multivariate regression analyses were performed to identify significant associations between arterial and adipose tissue FDG uptake and clinical variables as given by the standardized correlation coefficient (β). 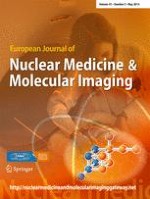 Anatomical and functional volume concordance between FDG PET, and T2 and diffusion-weighted MRI for cervical cancer: a hybrid PET/MR study

PET imaging of focal demyelination and remyelination in a rat model of multiple sclerosis: comparison of [11C]MeDAS, [11C]CIC and [11C]PIB