To assess the ability of a single isotropic 3D T2 FSE sequence to identify the normal appendix in children with potential implication as alternative second-line modality in pediatric appendicitis.

Retrospective review of MR abdomino-pelvis or pelvis in children from Oct 2014–Dec 2016 was done. Only exams with 3D T2 FSE sequence performed on a single scanner type were selected. Patients with history of post appendectomy, studies in which field of view did not include ileocecal valve, with technical and protocol errors, or with fat-saturated acquisition were excluded. All images were blindly reviewed by three radiologists. The following questions were asked: (1) Is the appendix visualized?, (2) What is the most clearly demonstrable plane?, (3) Where is the appendix located?, (4) Are there any findings indicating appendicitis? Average pairwise percentage and Fleiss Kappa were used to assess the inter-rater agreement on the visualization and location of the appendix.

A single 3D T2 FSE sequence had good ability to detect normal appendices and also allowed multiplanar reconstructions, which may use as a single-sequence protocol in cases of suspected appendicitis in children when ultrasound is inconclusive. 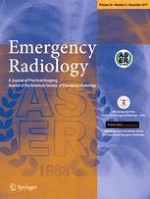 Usefulness of diffusion-weighted imaging for diagnosis of adrenal ischemia during pregnancy: a preliminary report