There is a widely held, but untested, belief that certain exercises and activities generate intraabdominal pressure (IAP) that may compromise the function of the pelvic floor muscles. Women with, or at risk of, pelvic floor disorders are advised therefore to refrain from these exercises and activities in order to theoretically protect their pelvic floor. The aim of this study was to compare IAPs generated during exercises of different types that are recommended to women as pelvic floor “safe” with those generated during the corresponding conventional exercises that women are typically cautioned against.

This was a cross-sectional cohort study. All participants were guided by a trained exercise practitioner through a series of ten exercise pairs, one version recommended to women as pelvic floor “safe” and one conventional version which women are cautioned against. IAP components were extracted from the pressure traces from a wireless intravaginal pressure sensor and used in multivariate linear regression modelling, canonical discriminant analysis, and linear mixed modelling.

A total of 53 participants were recruited. After adjusting for age, body mass index and parity, there was an exercise type–version effect (p < 0.01). After taking into account all pressure components of the IAP trace, there was a significant difference in IAP between the recommended and discouraged versions of the same exercise for five of the ten exercise types. Coughing and the Valsalva manoeuvre generated IAPs that were distinct from those generated by the exercises.

No differences in IAPs were found between the recommended and discouraged versions of the same exercise for all exercise types. In particular, the IAPs generated during the two versions of ball rotations, lunges, core, push-ups and squats did not differ significantly. Performing the recommended pelvic floor “safe” version instead of the discouraged conventional version of these exercises may not necessarily protect the pelvic floor and vice versa. 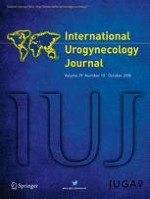 Clinical and ultrasonographic evaluation of the pelvic floor in primiparous women: a cross-sectional study

Female genital cosmetic surgery: the good, the bad, and the ugly

Multiparity, age and overweight/obesity as risk factors for urinary incontinence in pregnancy: a systematic review and meta-analysis