After IRB approval, a retrospective chart review identified consecutive unilateral breast cancer patients who underwent bilateral mastectomy and immediate breast reconstruction between May 2008 and May 2018 at a tertiary academic medical center. A paired sample t-test and a penalized logic regression model were constructed to identify relationships between breast laterality and outcomes.

A total of 1117 patients with unilateral breast cancer who underwent bilateral mastectomy and immediate breast implant reconstruction were identified. Rates of capsular contracture and infection were significantly greater in the diseased breast, while rates of revision were significantly greater in the contralateral prophylactic breast. There were no statistically significant differences between breasts in rates of explant, skin flap necrosis or hematoma. When adjusted for confounding variables, a higher infection rate was observed in the diseased breast. 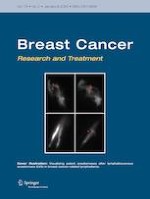 Increased expression of P-cadherin is an indicator of poor prognosis in breast cancer: a systematic review and meta-analysis