The FRAX tool incorporates data on the incidence of fractures and mortality in each country. The epidemiology of fractures changes over time, this makes it necessary to update the specific FRAX model of each population. It is shown that there are differences between old and new FRAX models in older individuals.

A new FRAX® model for Ecuador was released online in April 2019. This paper describes the data used to build the revised model, its characteristics, and how intervention and assessment thresholds were constructed.

The national rates of hip fracture incidence standardized by age and sex from the age of 40 years for 2016 were used to synthesize a FRAX model for Ecuador. For other major fractures, Ecuadorian incidence rates were calculated using ratios obtained in Malmö, Sweden, for other major osteoporotic fractures. The new FRAX model was compared with the previous model released in 2012. Assessment and intervention thresholds were based on age-specific probabilities of a major osteoporotic fracture equivalent to women with a previous fracture.

Fracture incidence rates increase with age. The probability of hip or major fractures at 10 years increased in patients with a clinical risk factor, lower BMI, female sex, a higher age, and a lower BMD T-score. Compared to the previous model, the new FRAX model gave similar 10-year fracture probabilities in men and women age less than70 years but substantially higher above this age. Notwithstanding, there were very close correlations in fracture probabilities between the two models (> 0.99) so that the revision had little impact on the rank order of risk.

The FRAX tool provides a country-specific fracture prediction model for Ecuador. This update of the model is based on the original FRAX methodology, which has been validated externally in several independent cohorts. The FRAX model is an evolving tool that is being continuously refined, as the databases of each country are updated with more epidemiological information.
Anzeige 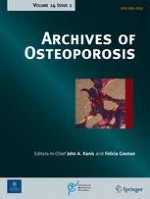 The effects of short-term back extensor strength training in postmenopausal osteoporotic women with vertebral fractures: comparison of supervised and home exercise program

The Dutch Hip Fracture Audit: evaluation of the quality of multidisciplinary hip fracture care in the Netherlands

Increased bone mineral density for 1 year of romosozumab, vs placebo, followed by 2 years of denosumab in the Japanese subgroup of the pivotal FRAME trial and extension

Oral bisphosphonates and incidence of cancers in patients with osteoporosis: a systematic review and meta-analysis