Our aim was to investigate the prevalence value of a high-avidity antinuclear antibody (ANA) of the IgG isotype (HA IgG ANA) compared with that of ANAs of other isotypes in patients with systemic lupus erythematosus (SLE) and to assess the associations of HA IgG ANA with the activity of SLE and lupus nephritis.

We retrospectively analyzed clinical and laboratory data from subjects. Blood samples were acquired from 101 SLE patients, 67 patients with other autoimmune diseases, and 65 healthy donors. The levels of HA IgG ANA and other isotype ANAs were measured by indirect immunofluorescence (IIF). The prevalence and diagnosis value of HA IgG ANA and other antibodies in SLE patient were tested. The advantage of HA IgG ANA compared with HA anti-dsDNA antibodies IgG (HA dsDNA IgG) was verified by ELISA. We monitored the relative avidity indexes (RAIs) of HA IgG ANA and HA dsDNA IgG at 3 time points after the start of treatment in the same individuals with SLE.

The prevalence of HA IgG ANA was significantly higher in active cases than in inactive cases of SLE and LN, which is consistent with data for IgG ANAs, anti-dsDNA IgG antibodies, low C3 levels, low C4 levels, and anti-C1q antibodies. HA IgG ANA showed moderate sensitivity and specificity (80% and 81.3%) for discriminating active and inactive SLE cases. However, HA IgG ANA showed no significant differences among the different clinical manifestations of SLE. Compared with that of HA dsDNA IgG, the RAI of HA IgG ANA was positively related to SLEDAI scores after treatment at 0, 1, and 3 months (r = 0.6813, p = 0.0026; r = 0.5972, p = 0.0114; r = 0.4817, p = 0.0474).

First, we demonstrated that HA IgG ANA was a reliable diagnostic tool in SLE patients. Furthermore, HA IgG ANA was supposed to be more appropriate for identifying the activity of SLE compared with HA dsDNA IgG. In summary, HA IgG ANA may be a new biomarker for diagnosing SLE and identifying SLE activity. 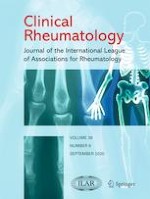 The changing profile of ankylosing spondylitis in the biologic era