The association of obesity with atrial fibrillation (AF) and with ventricular arrhythmias is well documented.

The aim of this study was to investigate whether weight reduction by a laparoscopic sleeve gastrectomy has any effect on P wave dispersion (PWD), a predictor of AF, and corrected QT interval dispersion (CQTD), a marker of ventricular arrhythmias, in obese individuals.

In a prospective study, a total of 114 patients (79 females, 35 males) who underwent laparoscopic sleeve gastrectomy were examined. The patients were followed 1 year. PWD and CQTD values before and 3rd, 6th, and 12th months after the surgery were calculated and compared.

PWD and CQTD values of patients were shown to be attenuated after bariatric surgery. These results indirectly offer that there may be a reduction in risk of AF, ventricular arrhythmia, and sudden cardiac death after obesity surgery. 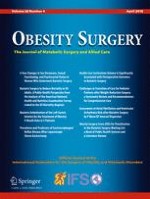 Comparison of Imaging Modalities for Detecting Complications in Bariatric Surgery

Reply to: “Patients’ Expectations Are Important for Success in Bariatric Surgery”