Hypofractionation has been recently considered as an alternative to improve stereotactic radiosurgery treatments of lesions close to the optic pathways. To estimate the intrinsic benefit from fractionation versus single-dose radiosurgery for perioptic lesions, the value of the alpha/beta ratio of the optic pathways needs to be known. Based on the linear quadratic (LQ) model, hypofractionation versus single-fraction SRS can be justified in cases where parts of the optic apparatus necessarily receive the full therapeutic peripheral dose, if there is a positive difference between α/ß of the lesion and the α/ß of the surrounding organs at risk. Furthermore, the knowledge of α/ß ratios is required to calculate radiobiological dose parameters, such as the biologically effective dose (BED) and single fraction equivalent dose (SFED), and helps estimate normal tissue complication probability (NTCP), dose constraints, and retreatment doses. Only 3 alpha/beta ratios for the visual system have been published so far, varying between -0.6 and 3.06 Gy.

The alpha/beta ratio of the optic pathways was estimated from a fraction equivalent plot based on a meta-analysis of 429 studies published between 2000 and June 2018. We included 15 studies with fraction sizes between 1 and 31, considering the following inclusion criteria: at least one well-documented RION case with detailed dosimetric analysis for the visual system, follow-up period (FUP) of at least 24 months, no tumor progression, no prior radiation. Additionally, we included results from our center on 68 hypofractionated treatments and 161 single-fraction SRS treatments for perioptic lesions.

The fraction equivalent (FE) plot method revealed an alpha/beta ratio of the optic pathway of 1.03 Gy, confidence interval [-0.38–1.60]. Well-documented RION cases are rare in the literature; there is still not enough data to distinguish between alpha/beta ratios of the optic chiasm, the nerves, and the tracts. Optimized hypofractionation schedules were calculated for the treatment of meningiomas, chordomas, and brain metastases.

Compared to single-fraction SRS, a significant intrinsic benefit from hypofractionation can be achieved, not only for perioptic malignant tumors, but for benign lesions as well, because of the very low alpha/beta ratio of the optic system of 1.03 Gy. An increased single fraction equivalent dose of up to 10% for perioptic meningiomas and of more than 25% for malignant tumors can be reached with optimized hypofractionated stereotactic radiosurgery schedules. 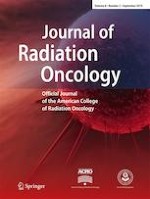 Challenges in the re-irradiation of locally advanced head and neck cancers: outcomes and toxicities

Thoracic radiotherapy for extensive-stage small-cell lung cancer: what is the optimal dose and timing?