To investigate the frequency, magnitude and possible causes of frame-shifts that may occur between treatment planning and treatment delivery when performing Gamma Knife radiosurgery with rigid frame-based immobilization.

The use of CBCT image guidance in frame-based GK radiosurgery allows unintended frame shifts to be identified and corrected. A significant fraction (24.5%) of patients had large enough shifts to result in a MSD of greater than 1.0 mm. Male gender and eccentrically placed frames were associated with increased MSD, and particular care should be taken in these cases. 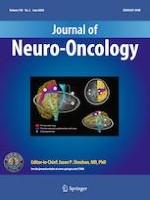 The prognostic significance of CDKN2A homozygous deletion in IDH-mutant lower-grade glioma and glioblastoma: a systematic review of the contemporary literature