Diabetes is an increasing problem in both developed and developing countries, and is a leading risk factor for vascular disease [ 1]. Recent estimates indicate that the prevalence of type 2 diabetes mellitus (T2DM) in the UK is around 4.3% [ 2]. Rising obesity and the demographic shift to an older population suggest that this prevalence will increase.
The treatment of T2DM comprises a combination of lifestyle changes and drug therapy. Care pathways for people with T2DM aim to address a decline in beta cell function typically via escalation from diet and exercise regimens to oral therapies and eventually insulin [ 3]. Oral antidiabetic drugs (OADs) are the mainstay of therapy for many T2DM patients, but many do not achieve the optimal reductions in weight, blood pressure or glycated hemoglobin (HbA1c), and might benefit from additional therapy. Consensus algorithms advocate the addition of a second OAD or basal insulin to metformin monotherapy, based on their glucose-lowering properties [ 4, 5]. While international organizations recommend a range of options for second-line therapy [ 5], the National Institute for Health and Care Excellence (NICE) recommends addition of a sulphonylurea (SU) as the preferred second-line option [ 4].
Anzeige
Recommended treatment algorithms that are based on the attainment of blood glucose targets may not account for changes in other cardiovascular risk factors in patients escalating from first-line monotherapy. This study aims to describe the unmet clinical need, defined as failure to reduce weight or meet targets for systolic blood pressure (SBP), total cholesterol (TC) or HbA1c levels in T2DM patients taking commonly prescribed OADs.

This study used retrospective cohort data extracted from The Health Improvement Network (THIN) database [ 6]. THIN currently contains the records of 9.1 million patients (3.4 million active patients) collected from ~500 general practices across the UK. THIN is a suitable data source for this study, which focuses on an unselected group of diabetic patients from the general population, rather than a specialist study group. This study was granted ethical approval from the Scientific Review Committee (SRC) (Reference 11-023, July 04, 2011).

Changes in the outcome (risk factor) variables (HbA1c, weight, SBP and TC) were analyzed over time in two ways. Firstly, the crude change in each outcome was calculated as the difference between the measurement immediately preceding initiation (monotherapy cohort) or prior to therapy addition (dual, triple, and insulin therapy cohorts), and the last recorded measurement in the period following OAD therapy initiation/escalation. Secondly, the gradient of change was calculated for the pre- and post-periods as the ratio of the change in each outcome and time (days) between the two measurements. The gradient provides a sense of the trajectory of each outcome in the pre-and post-periods, and hence the significance of OAD therapy initiation or escalation in terms of the change in risk factor adjusted for variation in time between observations. Subjects were required to have both measurement points pre- and post-change to be included in either calculation.
Subjects in each therapy cohort were evaluated for attainment of outcome targets at last recorded measurement. For HbA1c, SBP, and TC, values below 7.5%, 140 mmHg, and 5 mmol/L, respectively, indicated a favorable risk factor profile [ 7]. For weight, a negative coefficient for change indicated a favorable risk factor profile. Levels of target attainment (each variable alone and combination of all four) were evaluated for each therapy cohort.
All outcomes were analyzed descriptively using means, proportions, and standard deviations (SD). P values were presented for all t tests at a 5% level of significance. All analyses were conducted in Stata version 13 [ 8].
This article does not contain any new studies with human or animal subjects performed by any of the authors.

A total of 36,942 T2DM patients treated with one or more pharmacological agent in UK general practice were identified in the THIN dataset, with an average age of >60. The majority used a single OAD (monotherapy; n = 23,626), with progressively fewer subjects using two (dual therapy; n = 7,230) and three OADs (triple therapy; n = 1,612). There were a further 4,474 insulin users. There was an apparent positive association between lipid-lowering and blood pressure pharmacological therapies, and progression from a single to multiple OADs (Table  1).
Table 1
Summary of patient characteristics and risk factor analysis by OAD cohort
HbA1c glycated hemoglobin, OAD oral antidiabetic drug, SBP systolic blood pressure, SD standard deviation, TC total cholesterol
aPrior to initiation
bLipid-lowering therapies used by >5% patients receiving therapy: nicotinic acid, simvastatin, fenofibrate, cerivastatin, atorvastatin, pravastatin, and rosuvastatin
cBlood pressure medications used by >5% patients receiving therapy: diltiazem, nifedipine, chlorothiazide + spironolactone, verapamil, captopril, furosemide, Ramipril, chlorothiazide, enalapril, chlorothiazide + spironolactone + lactose, co-amilofruse
All OAD cohorts were associated with an increase in mean HbA1c prior to OAD initiation (monotherapy) or escalation (dual and triple therapy), followed by an observed decline in mean HbA1c post-initiation/escalation (Table  1; Fig.  1). Insulin users had the highest starting HbA1c levels (mean ± SD: 9.78 ± 1.94). Among non-insulin users, HbA1c levels prior to OAD progression were highest in the triple therapy cohort (8.71 ± 1.19), followed by dual therapy (8.48 ± 1.28) and monotherapy (8.03 ± 1.24). Across all therapy cohorts, statistically significant ( P < 0.05) changes in HbA1c between −0.93 and −1.47 were observed in the period following therapy progression.
×
Mean HbA1c levels observed in each OAD cohort before and after the initiation/escalation of therapy, plotted against the HbA1c profile predicted using results of the UK Prospective Diabetes Study (UKPDS) can be seen in Fig.  2 [ 9]; the position of reductions in HbA1c plotted for each OAD cohort reflects the mean duration of treatment observed in each cohort prior to therapy escalation. At initiation of monotherapy, the mean time since diagnosis of diabetes was 1.00 ± 1.60 years: patients received monotherapy for 2.64 ± 2.06 years prior to the addition of a second OAD; patients received dual therapy for 3.15 ± 2.41 years prior to the addition of a third OAD. The mean characteristics of the monotherapy cohort were used to initialize the HbA1c trajectory derived using the UKPDS 68 equation and therapy escalation thresholds implemented at 8.48 and 8.71%, corresponding to the dual and triple therapy cohorts, respectively.
×
Anzeige
With regard to weight profile, the monotherapy cohort was associated with a decline in weight (kg) of −1.67 ± 0.32 ( P < 0.001). Conversely, the addition of a second or third OAD or insulin was associated with weight gain at therapy escalation ( P < 0.05).
With regard to the risk factors SBP and TC, the monotherapy cohort experienced an average reduction of −1.96 ± 0.10 in SBP ( P < 0.001) and −0.52 ± 0.02 in TC ( P < 0.001). Dual therapy subjects and insulin users were associated with a decrease in TC and increase in SBP, while the converse was observed in subjects adding a third OAD. Attainment of SBP and TC targets was low, despite the use of blood pressure and lipid-lowering medications in the majority of patients.
Overall, the proportion of subjects that attained targets across all four risk factors (HbA1c, weight, SBP, TC) was highest in the dual therapy cohort (6%), followed by triple therapy (5%) and monotherapy (3%). Target attainment among insulin users was 3% on average, similar to the monotherapy group (Table  1).

Subgroup analyses of patients above and below 70 years of age did not suggest that levels of target attainment were lower in older patients (SDC Table 5). With the exception of SBP in patients receiving more than one OAD, observed attainment rates of individual and combined targets were not lower in the higher age group.
Anzeige

Patient outcomes among people with T2DM treated in UK general practice were often below what are considered to be milestones of optimal clinical response, even with a combination of pharmacotherapies. The potential unmet clinical need among people with T2DM is significant with respect to the control of blood glucose and other cardiovascular risk factors, including TC, SBP, and weight. Conventional treatment strategies are variably effective in managing the condition, and thus there is a need for new therapeutic agents, or approaches to treatment, to alleviate the health and economic burden associated with the T2DM.

Sponsorship and article processing charges for this study were funded by AstraZeneca plc, Molndal, Sweden. The funding agreement ensured the authors’ independence in designing the study, interpreting the data, writing, and publishing the report. Editorial assistance for this study was provided by Samantha Webster of Health Economics and Outcomes Research Ltd and funded by AstraZeneca plc, Molndal, Sweden. All named authors meet the ICMJE criteria for authorship for this manuscript, take responsibility for the integrity of the work as a whole, and have given final approval to the version to be published.

Klas Bergenheim is an employee of AstraZeneca plc.

This article does not contain any new studies with human or animal subjects performed by any of the authors. 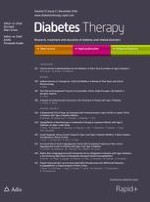 Improving Self-Monitoring of Blood Glucose among Adults with Type 1 Diabetes: Results of the Mobile™ Study

Insulin Degludec Versus Insulin Glargine in Type 1 and Type 2 Diabetes Mellitus: A Meta-Analysis of Endpoints in Phase 3a Trials

Higher Risk of Hypoglycemia with Glimepiride Versus Vildagliptin in Patients with Type 2 Diabetes is not Driven by High Doses of Glimepiride: Divergent Patient Susceptibilities?