Medical recordings of 30 patients who received RetCam fluorescein angiography during follow-up and had been treated with anti-VEGF on diagnosis of aggressive posterior ROP in the zone I or zone II between the dates of April 2014–January 2017 were evaluated retrospectively.

Fifty-nine eyes of 30 patients were included in the study. Mean birth weight was 1145 g; gestation week was 28.4. Recurrence occurred in 30.5% of the patients, and 10.1% of them were given a second dose of injection of anti-VEGF. Leakage was detected in 15.3% of the eyes during angiography, and all of these eyes were treated with laser photocoagulation. Evaluation of vascular development revealed that in the temporal, complete retinal vascular development was achieved in only 8% of the eyes. It was detected that complete retinal vascularization was not observed in any of the cases which were given second dose of injection due to recurrence. The patients were distributed into groups according to postmenstrual week taken to angiography as 32 eyes of 16 patients in group 1, 17 eyes of 9 patients in group 2 and 10 eyes of 5 patients in group 3. The vascular leakage rate of group 3 patients was statistically significantly higher (p < 0.05) and vascular development between groups was not statistically significant (p > 0.05).

With the initiation of FFA usage in pediatric cases, especially treated with anti-VEGF due to retinopathy of prematurity (ROP), more findings (vascular arrest, leakage, and abnormalities, etc.) are obtained than those achieved via ophthalmoscopic examination. In the light of these findings, early intervention with laser photocoagulation in early stages becomes possible enabling prevention of possible blindness. 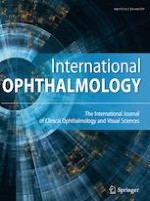 Correction to: Assessment of vascular leakage and its development with FFA among patients treated with intravitreal anti-VEGF due to aggressive posterior ROP