The online version of this article (doi:10.​1007/​s13402-017-0329-5) contains supplementary material, which is available to authorized users.
Concha López-Ginés and Lara Navarro contributed equally to this work.

Glioblastoma (GB) is the most frequent and most malignant primary brain tumor in adults. Previously, it has been found that both genetic and epigenetic factors may play critical roles in its etiology and prognosis. In addition, it has been found that the epidermal growth factor receptor gene (EGFR) is frequently over-expressed and amplified in primary GBs. Here, we assessed the promoter methylation status of 10 genes relevant to GB and explored associations between these findings and the EGFR gene amplification status.

Tumor samples were obtained from 36 patients with primary GBs. In addition, 6 control specimens were included from patients who were operated for diseases other than brain tumors. The amplification status of the EGFR gene, and its deletion mutant EGFRvIII, were evaluated using FISH and MLPA, respectively. The IDH1/2 gene mutation status was verified using Sanger sequencing. A commercial DNA methylation kit was used to assess the promoter methylation status of 10 pre-selected genes. Metabolic profiles were measured using HR-MAS NMR spectroscopy. The EGFR and ARF1 mRNA expression levels were quantified using qRT-PCR.

The results reported here provide a basis for a new hypotheses connecting EGFR gene amplification in GB cells with ARF1 gene promoter methylation, vesicle trafficking, membrane turnover and tumor metabolism. The mechanism(s) underlying these connections and their functional consequences remain to be established. 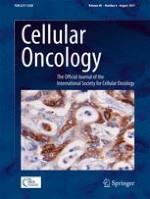 A step-by-step microRNA guide to cancer development and metastasis