Eight healthy men with normal renal function (eGFRcys 114 ± 19 mL/min/1.73 m2) participated in this study. Using a bicycle ergometer, participants underwent an incremental exercise test using a ramp protocol (20 W/min) until exhaustion in Study 1 and the lactate acid breaking point (LaBP) was calculated. Participants underwent a multi-stage test at exercise intensities of 60, 80, 100, 120, and 140% LaBP in Study 2. RBF was measured by ultrasound echo at rest and 5 min after exercise in Study 1 and at rest and immediately after each exercise in Study 2. To determine the mechanisms behind RBF decline, a catheter was placed into the antecubital vein to study vasoconstriction dynamics.

RBF after maximum exercise decreased by 51% in Study 1. In Study 2, RBF showed no significant decrease until 80% LaBP, and showed a significant decrease (31%) at 100% LaBP compared with at rest (p < 0.01). The sympathetic nervous system may be involved in this reduction in RBF.

RBF showed no significant decrease until 80% LaBP, and decreased with an increase in blood lactate. Reduction in RBF with exercise above the intensity at LaBP was due to decreased cross-sectional area rather than time-averaged flow velocity. 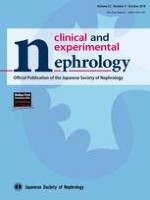 Change in the quality of life of caregivers of pediatric department patients undergoing kidney transplantation: a single-center prospective study