The online version of this article (https://​doi.​org/​10.​1007/​s00540-020-02736-4) contains supplementary material, which is available to authorized users.
This was presented as an oral presentation at the annual meeting of the American Society of Anesthesiologists in 2018. This study was performed at Samsung Medical Center.

We conducted a single-center retrospective study to evaluate the effects of intraoperative hypotension (IOH) on postoperative myocardial injury during major noncardiac surgery in patients with prior coronary stents with preoperatively normal cardiac troponin I levels. Although IOH is assumed to increase the risk of postoperative myocardial injury in patients with prior coronary stents, the level and duration of hazardous low blood pressure have not been clarified.

Of 2517 patients with prior coronary stents undergoing noncardiac surgery between January 2010 and March 2017, we analyzed 195 undergoing major surgery (vascular, abdominal, and thoracic surgery) who had a normal preoperative high-sensitivity cardiac troponin I (hs-cTnI) level and were followed up postoperatively within 3 days. Postoperative myocardial injury was defined as a hs-cTnI level greater than the 99th percentile reference value. Primary IOH exposure was defined as a decrease of ≥ 50%, 40%, or 30% from the preinduction mean blood pressure. Additional definition of IOH was absolute mean blood pressure < 70, < 60 or < 50 mmHg. Multivariate logistic regression was used to model the exposure and myocardial injury. 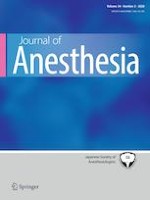 Reply from authors: The association of intraoperative end-tidal carbon dioxide with the risk of postoperative nausea and vomiting

Reply to the letter

EtCO2 and PONV: are the results really important?

Use of intraoperative neuromuscular monitor reduces the reversal dose of sugammadex: a single-center retrospective study