In the present study, the association between objectively measured built environments and physical activity (PA) was examined.

Although the associations of individual factors with PA were stronger than of community factors, notably, built environments influenced most people in a community. Therefore, along with health education and service, policy makers and planners should consider more parks in less populated areas to create a supportive environment for PA. 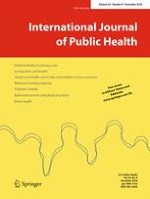 Chronic conditions and multimorbidity in a primary care population: a study in the Swiss Sentinel Surveillance Network (Sentinella)

What will it take to get the evidential value of lay knowledge recognised?