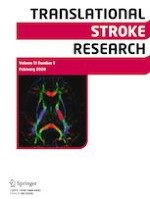 Vascular Arginase Is a Relevant Target to Improve Cerebrovascular Endothelial Dysfunction in Rheumatoid Arthritis: Evidence from the Model of Adjuvant-Induced Arthritis

Adult Neurogenesis in the Subventricular Zone and Its Regulation After Ischemic Stroke: Implications for Therapeutic Approaches