The aim of this study was to test the hypothesis that intensive glycaemic control (INT) and higher plasma C-peptide levels in patients with poorly controlled diabetes would be associated with better eye outcomes.

The incidence and progression of diabetic retinopathy (DR) was assessed by grading seven-field stereoscopic fundus photographs at baseline and 5 years later in 858 of 1,791 participants in the Veterans Affairs Diabetes Trial (VADT). 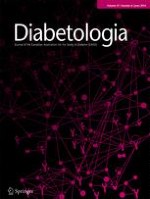