It is known that incidence and short-term mortality rate of acute myocardial infarction (AMI) tend to be higher in the cold season. The aim of our study was to investigate the association of onset-season with patient characteristics and long-term prognosis of AMI. This was a prospective, multicenter, Japanese investigation of 3,283 patients with AMI who were hospitalized within 48 h of symptom onset between July 2012 and March 2014. Patients were divided into 3 seasonal groups according to admission date: cold season group (December–March), hot season group (June–September), and moderate season group (April, May, October, and November). We identified 1356 patients (41.3%) admitted during the cold season, 901 (27.4%) during the hot season, and 1026 (31.3%) during the moderate season. We investigated the seasonal effect on patient characteristics and clinical outcomes. Baseline characteristics of each seasonal group were comparable, with the exception of age, Killip class, and conduction disturbances. The rates of higher Killip class and complete atrioventricular block were significantly higher in the cold season group. The 3-year cumulative survival free from major adverse cardiac events (MACE) rate was the lowest in the cold season (67.1%), showing a significant difference, followed by the moderate (70.0%) and hot seasons (72.9%) (p < 0.01). Initial severity and long-term prognoses were worse in patients admitted during the cold season. Our findings highlight the importance of optimal prevention and follow-up of AMI patients with cold season onset. 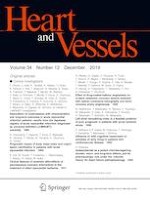 Acetazolamide as a potent chloride-regaining diuretic: short- and long-term effects, and its pharmacologic role under the ‘chloride theory’ for heart failure pathophysiology