The purpose of this study is to determine the role of T lymphocyte immune imbalance and interleukin (IL)-10 gene polymorphism in the development of obstructive sleep apnea (OSA) in obese children.

One hundred obese children at high-risk and low-risk for OSA based upon a sleep questionnaire were selected. Peripheral blood T lymphocyte subsets were measured by flow cytometry, and plasma IFN-γ, IL-4, and IL-10 cytokines were detected by ELISA. The relationships between OSA and the above variables were analyzed. IL-10 gene polymorphisms were analyzed by DNA sequencing.

T lymphocyte immune imbalance was associated with OSA and IL-10 may play an important protective role in the pathogenesis of OSA in obese children. 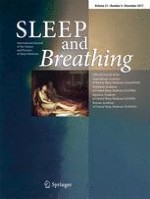 What sleep behaviors are associated with bruxism in children? A systematic review and meta-analysis

Sleep correlates of substance use in community-dwelling Ethiopian adults