Recent studies demonstrated that aberrant activation of Toll-like receptor (TLR) 4 was involved in the pathogenesis of Henoch–Schönlein purpura (HSP). In this study, we evaluated the association between TLR4 gene polymorphisms and the risk of childhood HSP in a Chinese population. A total of 175 HSP patients and 186 controls were recruited in this case–control study. Three single-nucleotide polymorphisms of the TLR4 gene (rs1927914, rs10759932 and rs1927907) were genotyped using the matrix-assisted laser desorption/ionization time-of-flight mass spectrometry (MALDI-TOF MS) and Sequenom MassARRAY system. Our results revealed that a significantly reduced risk for HSP was associated with the G allele (OR = 0.71; p = 0.023) and G/G genotype (OR = 0.49; p = 0.021) of rs1927914. We also showed that rs1927914 variant decreased the risk of HSP in recessive inheritance model (OR = 0.55; p = 0.035, G/G vs A/A + A/G). In addition, we observed that a significantly decreased frequency of the haplotype GTC (rs1927914-rs10759932-rs1927907) in HSP patients compared with controls (OR = 0.56; p = 0.028). Our data suggested that TLR 4 rs1927914 polymorphism was associated with the decreased susceptibility to HSP in the Chinese children. 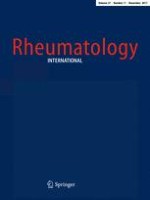 Mortality and prognostic factors in idiopathic inflammatory myositis: a retrospective analysis of a large multicenter cohort of Spain