Association of use of Chinese herbal medicines and the risk of fracture in patients with osteoporosis: a population-based cohort study | springermedizin.de Skip to main content
TOOLBAR 1 2 3 4
SUCHE MENÜ 1 2 3 4

After utilizing a large population-based claims database and the application of propensity score match approach to reduce the confounding effects, we found that the use of Chinese herbal medicines (CHMs) was related to the lower risk of sequent osteoporotic fracture by 27% among the individuals with osteoporosis. The predominant effect was observed in those receiving CHMs for more than two years.

Osteoporosis (OS) is a highly disabling condition that can lead to fragility fracture, thus posing greater burdens of functional limitations for the affected individuals. It is unclear if the use of Chinese herbal medicines (CHMs) could reduce the risk of fracture due to OS. This study aimed to investigate the association of CHMs and the subsequent osteoporotic fracture risk among OS patients.

This longitudinal cohort study used the Taiwanese National Health Insurance Research Database to identify 250,699 newly diagnosed OS patients aged 20 years or older between 1998 and 2010. We recruited 103,325 CHM users following the onset of OS (CHM users) and randomly selected 103,325 subjects without CHM usage as controls (non-CHM users) by propensity score matching according to the demographic characteristics and comorbidities at enrollment. All enrollees were followed until the end of 2012 to record the incidence of osteoporotic fracture. We applied the Cox proportional hazard regression model to compute the hazard ratio (HR) of the risk of osteoporotic fracture.

The use of CHMs was associated with lower risk of osteoporotic fracture for OS patients, suggesting that it could be integrated into conventional therapy to prevent subsequent bone fracture. 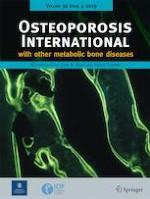 Hip fractures in Singapore: ethnic differences and temporal trends in the new millennium

Risk of osteoporosis and fracture in victims with burn injury