We examined the associations between adolescent risk behaviors and household chaos, and whether associations varied by adolescents’ sense of school belonging. We collected data from 801 Chilean adolescents from working-class families (M age 16.2 years). Approximately, one-quarter of participants reported past-month cigarette use, and 8% and 9% reported past-month binge drinking and marijuana use, respectively. More than half of youth reported having sex (52%), 23% of youth reported having unprotected sex at their last encounter, and 14% reported having multiple sex partners. Within the past year, 16%, 36%, and 23% reported carrying a weapon, physically attacking someone, and threatening to physically hurt someone, respectively. Greater household chaos was related to increased odds of each risk behavior except unprotected sex. These associations did not vary significantly by level of school belonging. Results are compared to previously reported results using a U.S., largely Latinx sample in attempts to replicate findings across culture and context. 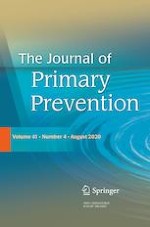 Community Readiness for Child Maltreatment Prevention: The Challenge of a Brief Assessment

Exploring Supports and Barriers to Physical Activity in Catholic Priests