A single-center review of prospectively obtained perioperative and 30-day outcome data, including AXM use at admission, as part of the National Surgery Quality Improvement Program.

Sixty-three of the 393 patients who presented for ventral hernia repair were taking an AXM (15.6%). AXM users were more likely to have a higher ASA class, dyspnea, and treated hypertension (p < 0.05). AXM use was associated with increased operative duration, hernia size, increased estimated blood loss, and need for component separation. After adjusting for medical comorbidities, AXM users were not found to have greater 30-day morbidity or mortality. Patients taking AXM were found to have greater length of stay and increased hospital readmissions. 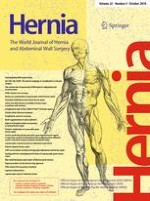 Inguinal endometriosis, a rare entity of which surgeons should be aware: clinical aspects and long-term follow-up of nine cases

Dealing with the round ligament of uterus in laparoscopic groin hernia repair: a nationwide survey among experienced surgeons