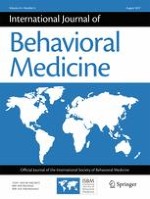 Examining the Relationship Between Pain Catastrophizing and Suicide Risk in Patients with Rheumatic Disease: the Mediating Role of Depression, Perceived Social Support, and Perceived Burdensomeness

Expectation of a Decrease in Pain Affects the Prognosis of Pain in Cancer Patients: a Prospective Cohort Study of Response to Morphine